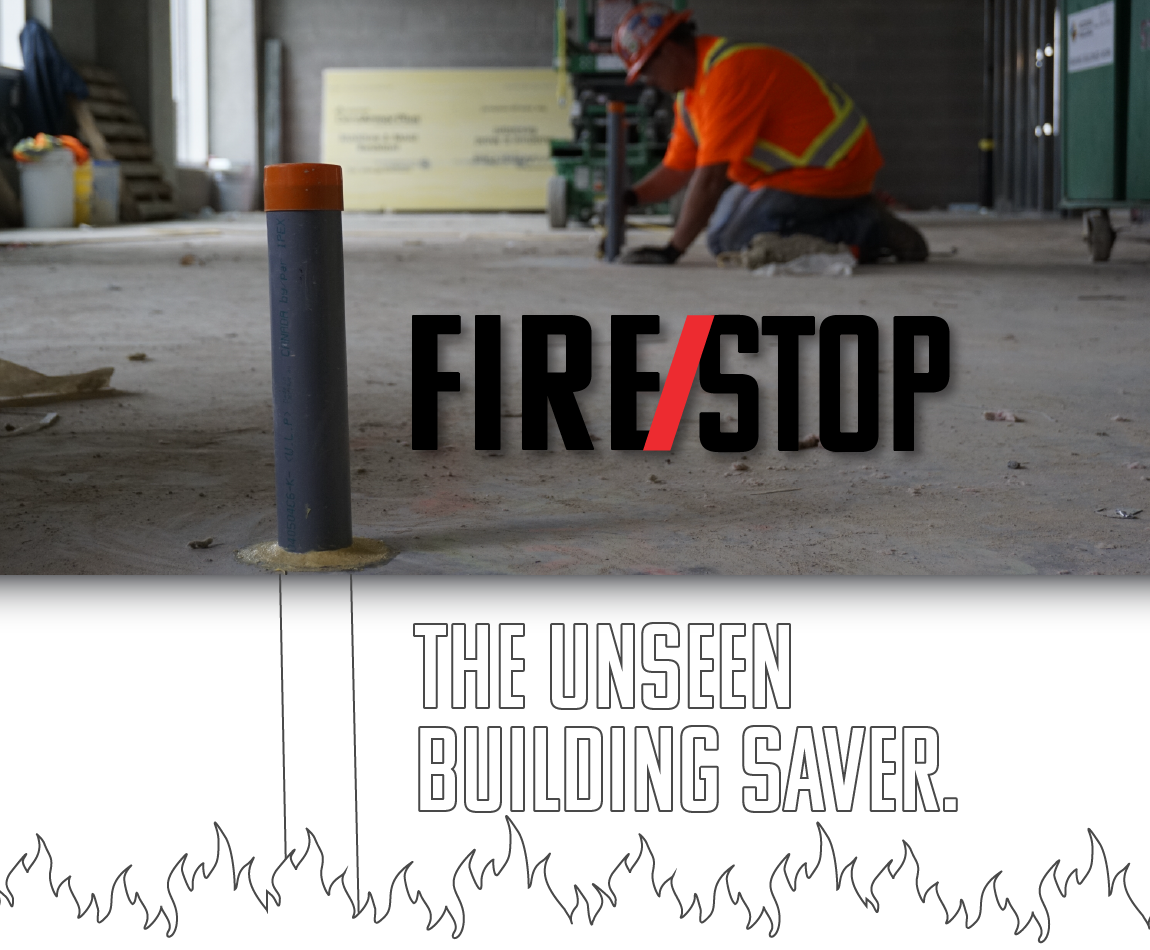 Firestopping is the practice of utilizing a system of joint and penetration sealants on a fire-rated wall, ceiling, or floor assembly within a building. Ontario building code dictates that any piping, tubing, or other form of equipment that penetrates through a rated fire separation must be firestopped to ensure the integrity of the rated fire separation is maintained. Proper firestopping efforts are a requirement for both new construction and existing construction retrofits, and will prevent a building from achieving building occupancy if missing during the inspection phase, resulting in costly delays.

Proper firestopping efforts result in compartmentation that ensures smoke and fire are not able to pass through a fire separation. Without proper firestopping, mechanical, electrical, HVAC, or IT components that penetrate through a fire separation can allow smoke or fire to pass through a separation, resulting in increased damage to the building, compromised fire safety, and increased exposure to smoke and fire for those still within the building.

Many construction contractors abide by a "make a hole, fill a hole" rule, where a fire separation penetration is filled by the contractor who created it. This may be enough in some circumstances, but oftentimes the firestopping materials contractors have on hand are not the best-suited materials for the job. With a company like Great Northern Insulation that employs qualified craftsmen who specialize in fire stopping, and enjoys strong relationships with the top fire stopping product manufacturers, you are guaranteed to have the best possible fire stopping solution for each unique job. Great Northern Insulation maintains strong business relationships with all of our valued manufacturers, and our qualified craftsmen undergo extensive training to ensure the highest standard of quality on every project. Furthermore, GNI is a member of the Firestop Contractors International Association.

INDUSTRIES WE WORK WITH

Great Northern Insulation specializes in firestopping for a wide variety of industries and applications, including:

Within these buildings we have assisted in the proper application of firestopping materials for mechanical, electrical and HVAC systems, as well as fire sprinklers and IT or telecom equipment. We also have extensive experience with top of wall and curtain wall installations to ensure a quality firestop installation that allows your projects to achieve building occupancy and meet building code standards, all while eliminating costly delays.

From reputation to responsiveness, HomeStars consistently ranks Great Northern Insulation at better than 95% for customer satisfaction. Thanks to everyone for the great ratings!

For the second year in a row, HomeStars consistently ranks Great Northern Insulation at better than 95% for customer satisfaction. Thank you again to everyone!

For the third year in a row, HomeStars ranked Great Northern Insulation at better than 95% for customer satisfaction.

For four years now, HomeStars has ranked Great Northern Insulation at better than 95% for customer satisfaction.

The Energy Conservation Program provides incentives of up to $1,600 to customers who achieve energy efficiency and fuel savings – and Great Northern Insulation can pave the way.